Year 7 showed excellent determination in their recent netball match against Goresbrook School. The game remained very close with Greatfields not ever taking a lead in the first 3 quarters. There were some changes made after the 2nd quarter and Rawnaq made her debut for the team, bringing some great defensive play with her. The marking in the circle was accurate and allowed for Sarah to pick out passes to Marta, Naomi and Ashlee up court. Ashlee shot with composure in the final quarter to take the lead with 2 minutes to go. The girls remained calm and played with all their effort until the final whistle.

Player of the match: Rawnaq 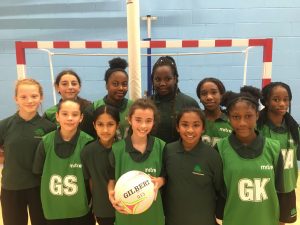