Another fantastic afternoon of Borough netball!

The Year 8 girls finished 3rd in their pool, missing out on the semi-finals by 1 point. They played some much-improved netball and should be proud of their performance.
The Year 7 girls finished 2nd in their pool which meant they played Dagenham Park in their semi-final. Unfortunately, the girls were unable to keep up with the speed of their play and faced their last opportunity for a medal in the 3rd/4th playoff game. The girls played JRCS, who they previously beat in the pool but the girls, looking very tired, lost the game to a respectable 2-1.

Really good season for both teams!!! 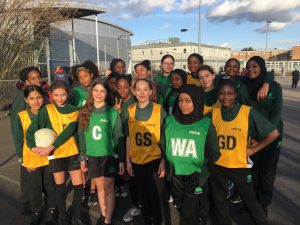 Please click on the link below to see our Parents/Carers Calendar for key dates:

Find out here if you are eligible and how to apply.

Please click here and select your child’s year group to view the homework calander. Homeworks are displayed by form groups and subject.

Wonderful art piece by Emmanuel in Year 7 To see more amazing art pieces being produced during school closure, check out our Instagram page @greatfieldsartdep #greatfieldsartdep Don't forget to take part in our art challenges and keep sending in your art work!!! pic.twitter.com/X1gL5RjTUV

Kooth.com is a Free Online Counselling for children and young people, accessible through mobile, tablet and desktop! Kooth.com #COVID2019 #helptheyouth

Free School Meals. All students who are entitled to Free School Meals can collect a meal from school tomorrow (Wednesday 25th March) at 11.30am. If you have any questions please contact the school. My best wishes are with you and your families. Mr Paul #StayAtHomeSaveLives

2nd Place for Year 10 Netball Team in the Borough League!!! Their persistence, determination and team work has paid off and as a school we are extremely proud. This is a fantastic achievement #achievementunlock pic.twitter.com/OME09l02Hw